Hey, I heard you guys like trash. Welcome to another installment of Ad Nauseum: a completely original idea where I look at old ads from childhood comic books and write about them as a means to escape an unfillable void!

Let’s wind the clocks back to December 1996, a time where Superman inexplicably had a mullet, Nickelodeon was in its golden era, Bill Clinton was totally not getting head in the oval office, and Michael Jordan kept telling me I should buy a particular brand of hot dogs based solely on plumpness. 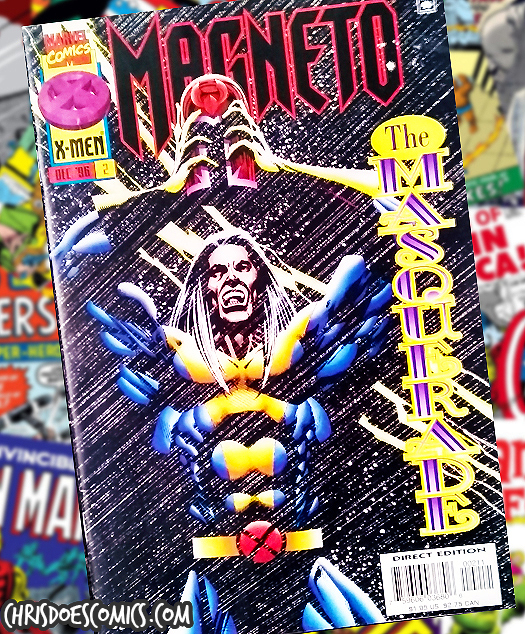 Magneto is quite possibly one of my favorite comic book characters of all time. And riding that X-Men high from the mid-90’s, he was able to acquire his own title in the form of several miniseries throughout the era. This is the first of 3 miniseries and is the second of four issues. In this particular issues Magneto does such badass things as cry about his daughter and complain about violence. Let me remind you this was the 1990s, which means every character you were reading about was always revealed to be a clone or cyborg. Duh!

I found this issue in a clearance drawer for 50 cents. And even though the bookstore was nearly empty, the one customer besides myself was browsing the same section without a shred of decency concerning personal space. Humans are very irritating.  So it’s fitting this all led me to a Magneto comic. He smelled like stale pizza rolls.

Universal’s “newest” theme park didn’t open until 1999 but they built up years anticipation in what is one of their earliest ads! The park was a smorgasbord of Intellectual Properties such as Jurassic Park, Dr. Seuss, and Marvel Superheroes. In this particular ad the park “skyline” is illustrated from early concepts and is showcasing the Incredible Hulk roller coaster!

I was lucky enough to visit Islands of Adventure multiple times as early as 2000.  And as much as I enjoy Disney, it was a very special feeling to be among superheroes at Marvel Superhero Island. I seen ads in my Marvel comics for years building up this section of the park. Realize this was long before a cinematic universe. Tony Stark and Stan Lee were names only “nerds” recognized. Walking around this colorful “city” ripped straight from comic panels, passing Kingpin’s “gambling” arcade, and Fantastic Four’s cafe seemed to good to be true. Walking through Dr. Doom’s fortress and seeing an army of full scale Doombots was incredible!

Due to Disney now owning the rights to Marvel, Universal Islands of Adventure has an agreement to still use the characters for this section of the park but Universal can only use what they have. Therefore the Island is stuck in this late 90s era of Marvel comics style. This may seem disappointing with how much Marvel has grown in the years but I find it very comforting to see this piece of childhood nostalgia frozen in time when comics were most important to me. ‘Nuff said!

Editors note: The park does not feature a twelve story raging Hulk. Sorry.

This ad for Crash Bandicoot on the Playstation perfectly exemplifies the 1990s counter culture “attitude” of the era. The idea of costumed characters in rebellious “adult” situations mixed with the crude “handwritten” messages to create this almost scrapbook-like advertisement was fresh and cool way of marketing your garbage.

I didn’t pick up a copy of Crash Bandicoot until it was a “Greatest Hit” on the Playstation about 3 years later. This was a great 3D platforming game with solid humor and a fun style. It was Playstation’s attempt at a Mario or Sonic. And though Crash was cool and had good games to back him up, he never really met that level. My favorite thing about this ad is definitely the picture of Crash showing of his new game at Nintendo headquarters.

My main question is why Crash is traveling to Seattle exactly. Perhaps this was a series of ads that featured Crash traveling major cities to show off his new game? If anything, Crash taught me that a Bandicoot is an actual living animal. A marsupial based in Australia. Though I highly doubt they can drive automobiles. Who said video games rot your brain? 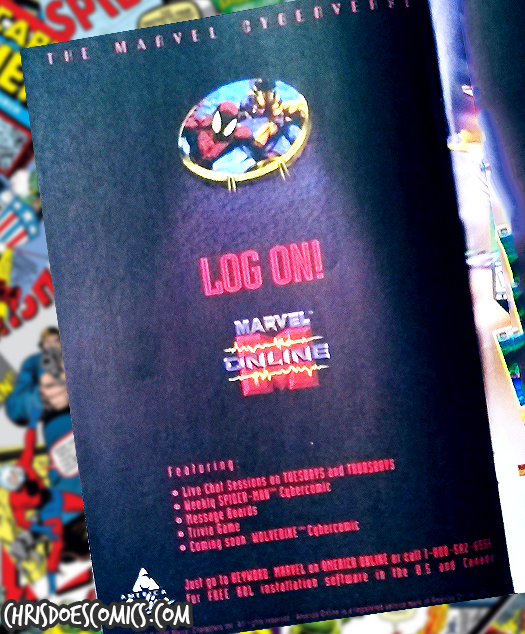 Well now the masses have access to this thing called the internet. And American Online was a browser that pretty much streamlined it to where anyone can use it.

Having a website at this time meant you were somebody. And the mere idea of the internet to someone like myself was expansive in thought yet limited in execution. I remember one of my first interactions with the internet involved me trying to wrap my head around being able to look up information on anything. My fingers hovering over the keyboard overwhelmed. I specifically remember visiting the official website of Star Wars, Indiana Jones, WWF, Disney, and Marvel. Take it, there wasn’t much to these sites back then…but it was still a new exciting experience. And little did I know Disney would end up owning mostly everything I loved.

This ad for Marvel Online in particular takes me back to the early days of internet. Calling itself the “C Y B E R V E R S E” with exclusive features like Live Chat Sessions, Cybercomics, and Message boards. Message boards were probably my favorite thing about the internet. Being able to connect with other fans all over the world about such niche interests and hobbies was fascinating at the time. Being able to access exclusive comics of Spider-man or Wolverine for free was something captivating.

In this time, when left to your own devices, you had what you had. But the idea of having a device that was constantly updating, evolving, and changing around your interests and hobbies but being able to access it anytime? It was mind bending. Suddenly being “stuck” in video games and not knowing song lyrics was gone….expansive knowledge on your favorite subjects you can only find in libraries was all there. And it was just waiting for you to find it.

Also AOL Keywords. That was a thing.

Sometime in the late 1990s somebody at Fox thought it’d be a good idea to put Lance Hendrickson’s enormous head on television and I actually watched it every week with my grandma. Well, really, X-Files was huge at the time and the creator decided to give another swing with a series titled Millennium.

It’s about an ex-FBI agent that can read the minds of criminals and works in Seattle where he probably ran into Crash Bandicoot. The series ran for 3 seasons and was cancelled right before the friggen’ Millennium! So close! Imagine the X-Files meets Se7en and you got yourself Millennium. I remember the show being very atmospheric and gritty. And you can use those words to describe Lance Hendrickson’s forehead alone. After it’s cancellation it had a crossover with the X-Files for an episode to give things closure.

And, after that, Lance Hendrickson decided to haunt every horror convention within a 1200 mile radius of his home.

If that’s not enough for you, IDW actually published a 5 issue Millennium series of comics in 2015 proving that nearly anything can get revived as a comic! And I sit here like an idiot waiting for a Perfect Strangers season 9 in comic form.

Oh, sweet nectar of the horror Gods! I praise thee!

McFarlane Toys was pretty much the company that stepped up and made adult collectable action figures a thing (in the US anyway). Started by Spawn creator and human slinky dog, Todd McFarlane, McFarlane Toys took IPs that appealed to adults and made super detailed high end collectable figures. The Movie Maniacs line took R-rated slashers like Freddy Krueger, Michael Myers, Norman Bates, Leatherface, and Jason Vorhees, packaged them, and sold them so your mom could complain about how you’re well on your way to becoming a serial killer.

The set pictured featured “blood splattered” variants in which you can order all 3 for $29.95. Pretty incredible considering a single figure fetches a price of around $50 unpackaged nowadays. To much surprise, I actually never owned a single McFarlane Movie Maniac. And the series expanded quite bit from Predator and Terminator to The Blair Witch and even Shaft for some reason.

I couldn’t tell you why I never partook in buying a single action figure from a toy line that seemed to be marketed specifically for me...it could’ve been that I was too caught up in Sideshow Collectable Universal Monsters figures…or I was simply too thick headed to pick up on signals like that girl in my art class junior year of high school (sorry Liz).

Looks like we’re on the last page of Magneto Vol. 1 Issue 2  from December 1996. I hope you enjoyed reading my overblown recollection of theme parks, Lance Hendrickson, and bloody action figures. While typing this article I actually had a coworker ask what I was doing. After I explained they had a look of complete bafflement on their face and simply asked, “Why?”.

I honestly didn’t have an answer.